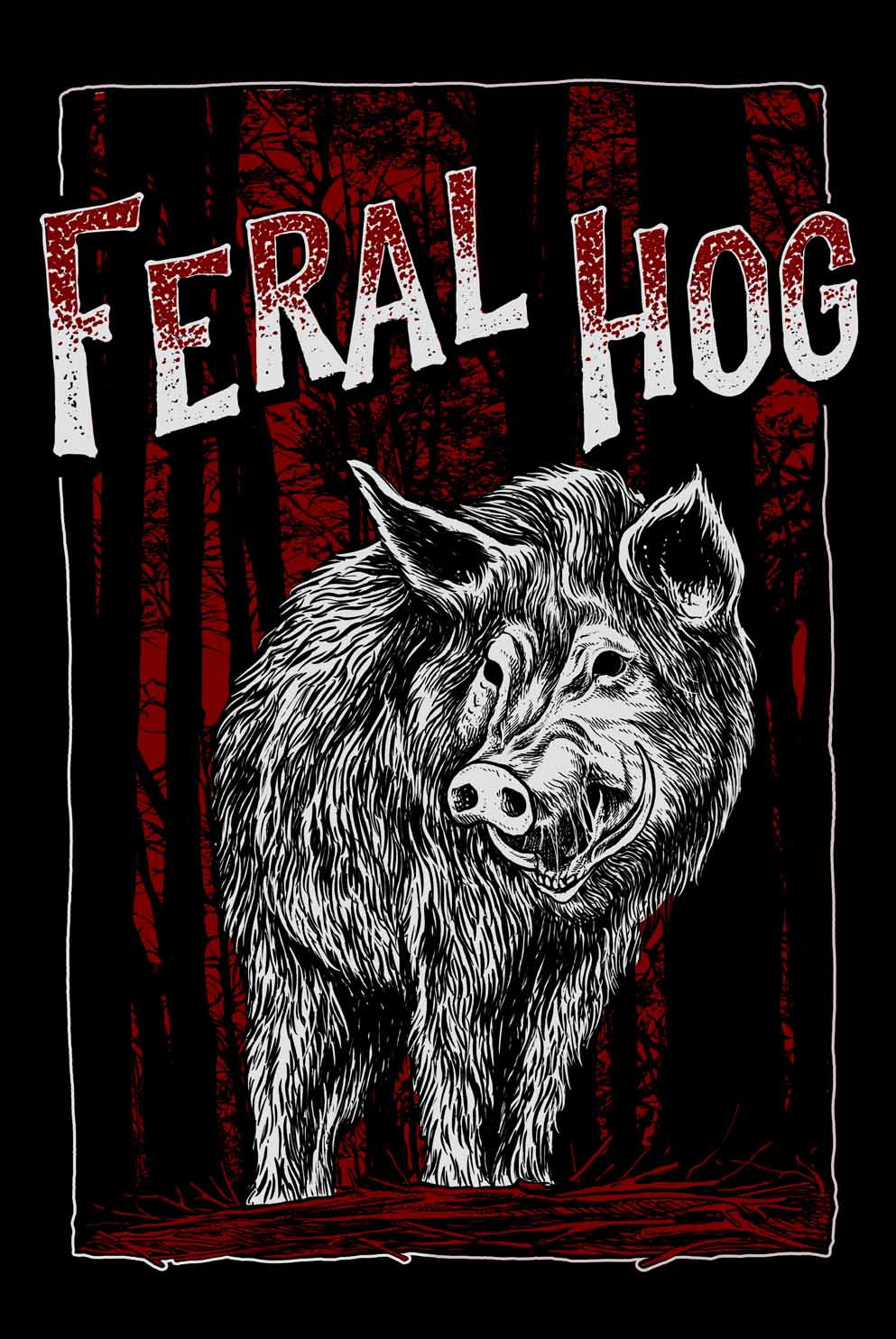 Meet the four-legged ecological disasters that are feral hogs.

Feral hogs, or feral pigs or swine, cause damage to wildlife habitat wherever they exist. They often directly compete for food with other species such as white-tailed deer, black bear, and wild turkey. They are known to destroy the nests of ground nesting birds as well as prey upon snakes, salamanders and other native species. Feral hogs often carry diseases or parasites that can be passed to livestock, pets, hunting dogs, or in some cases humans. The only place hogs should be found is within the confines or boundaries of their owner’s property as a livestock or domestic animal, where they are cared for according to all livestock or domestic animal regulations. Anywhere outside of these physical and regulatory boundaries they are a direct threat to our natural resources, environmental quality, and agricultural interests.

Feral hogs in Virginia are defined as “any swine that are wild or for which no proof of ownership can be made” and are designated as a nuisance species per the Code of Virginia (§29.1-100) and the Virginia Administrative Code (4VAC15-20-160). Escaped domestic hogs can become feral hogs if not recaptured and kept in an agricultural capacity. All feral hogs — wild pigs, wild hogs, wild boars, and Russian boars — are of the species Sus scrofa and fall under this designation despite color of hair or any other physical differences hogs may have.

If you see or have evidence of feral hogs, please report it to the Virginia Wildlife Conflict Helpline at 1-855-571-9003. Hunting alone will not control these populations and may in fact make the population harder to control so please contact us for more help. If you have evidence that someone is illegally releasing feral pigs on the landscape please contact a Conservation Police Officer at: WildCrime@dwr.virginia.gov or 800-237- 5712. 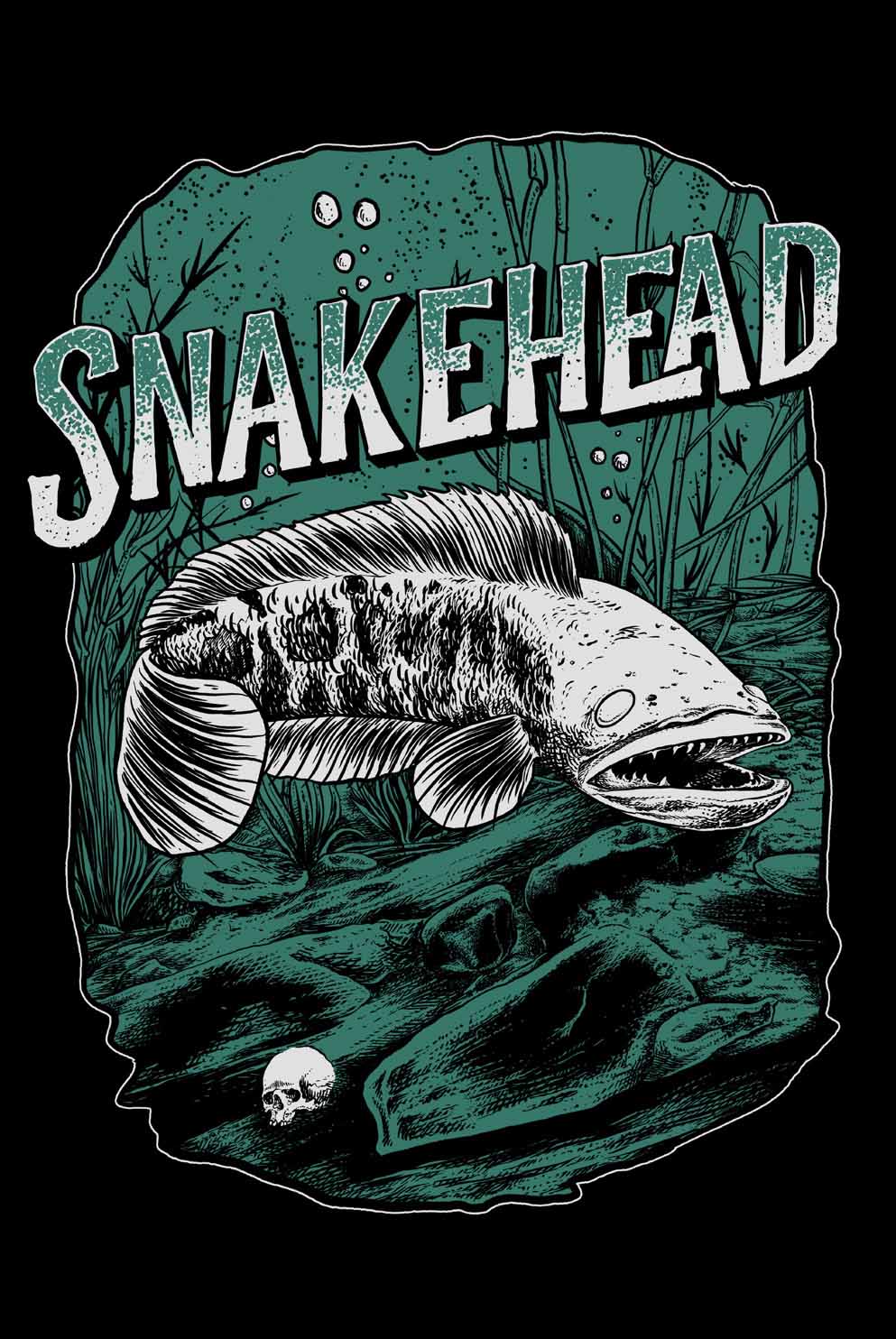 Native to parts of Asia and Africa, northern snakeheads have the unusual combination of an intimidating appearance and yet being delicious to eat. In Virginia since 2004, the snakehead species has shown up in the Potomac and Rappahannock rivers and their tributaries as well as in various ponds and lakes.

This fish is an obligate air breather, using an air bladder that works as a primitive lung (not found in most fish). It’s able to hibernate in substrate including cracks and crevices during cold temperatures and to go dormant in mud during droughts.

A top-level predator, it eats mostly fish, but also eats other aquatic wildlife including frogs. Exotic species like snakeheads can disrupt natural aquatic systems and may have significant impacts by feeding on and competing with native and/or naturalized fishes.

In addition, they may transmit parasites and diseases to native wildlife in those systems. Biologists continue to sample snakehead-colonized waters in an effort to learn more about the ecology and biology of this exotic fish in Virginia. Migration, exploitation, food habits, growth, and behavior of northern snakeheads are being studied; and attempts are being made to determine what impacts, if any, are occurring to aquatic communities as a result of colonization.

If you catch one of these creatures, you can help in our research by reporting it at 804-367-2925. There is also a new, easy-to-use web application for reporting observations. Anglers are required to report snakeheads kept but are not required to kill them if caught and immediately released. If an angler wishes to keep a legally caught northern snakehead, the fish must be killed to be in possession, and the angler must call the hotline or other DWR contact and report the angler’s last name, date of catch, location of catch, and size. DWR does encourage harvest of snakehead. 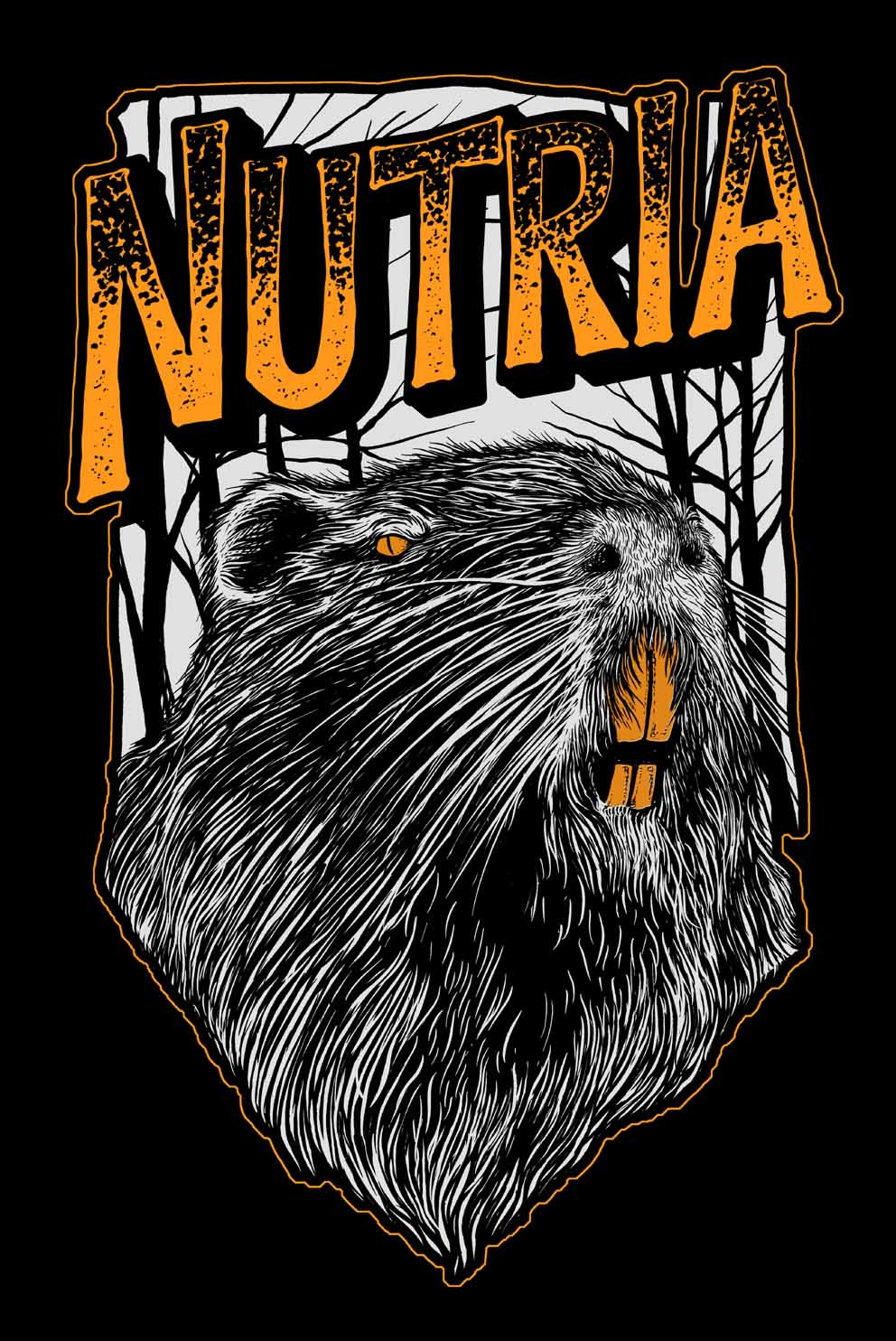 Rodents of unusual size (R.O.U.S.) do exist, and they do lurk in marshes! Nutria, or Myocastor coypus, is a large, invasive, semi-aquatic species of rodent that threatens Virginia’s wetlands. Armed with giant, orange incisors and voracious appetite for vegetation, this creature can chew through beautiful wetland landscapes, turning them into bare patches of mud that then become eroded to open water over time. They eventually outcompete native wildlife by destroying their habitat, which is scary for Virginia’s wildlife.

Nutria produce up to three litters each year of four to five young, a reproduction rate that left unmanaged can quickly lead to thousands upon thousands of individuals. #scary They grow to between 15 and 30 pounds. Each nutria can consume up to 25% of their body weight in vegetation a day, and they feed year-round.

If you’re not a wetland, you have no reason to fear physical harm from a nutria, but Virginia’s unique waterway ecosystems are under threat from this invasive species. Visit the link below to find out more about nutria, where they are, how to tell them apart from the native species muskrats and beavers, and what you can do to help. 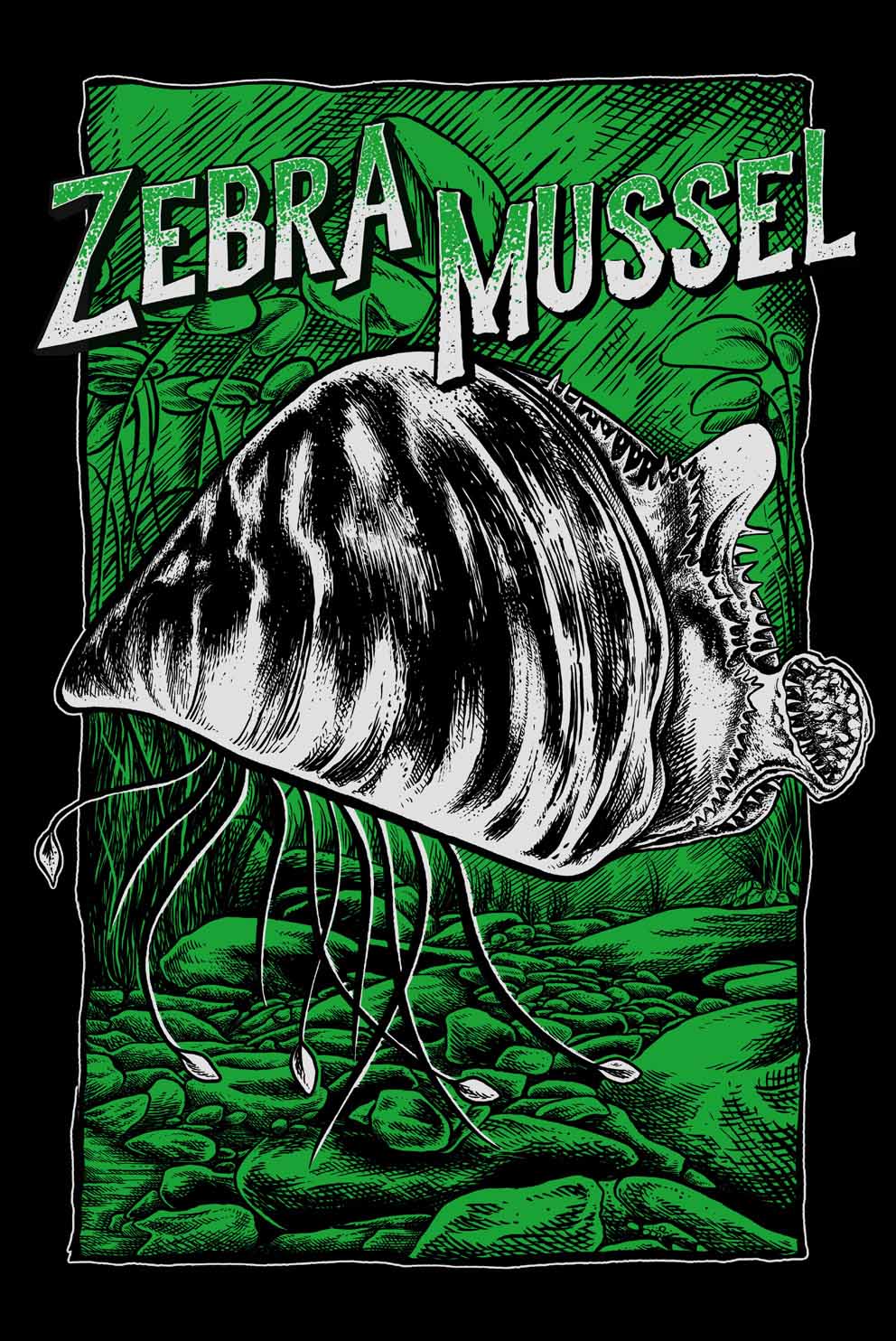 What’s so scary about a fingernail-sized creature with stripes? They may look tiny and innocuous, but zebra mussels (Dreissena polymorpha) flex some powerful muscle as a significant threat to the Commonwealth’s native ecology and wildlife communities.

Virginia doesn’t currently have a known population of zebra mussels, but the state has had a few very close calls. In August 2002, zebra mussels were documented for the first time in Virginia in an abandoned quarry in Prince William County that is used for instructional and recreational scuba diving. DWR worked with a number of state, federal, and local agencies to eradicate the zebra mussel population at Millbrook Quarry, and confirmed the successful eradication of the infestation in May 2006.

In March 2021, DWR got an alert that some Virginia pet stores were selling live marimo moss balls for aquarium use that may have been contaminated with invasive zebra mussels. With a concerted awareness outreach effort and by working with pet stores directly, DWR succeeded in getting the possibly contaminated moss balls off the market.

Zebra mussels remove the food base upon which many of our native fish and freshwater invertebrates are dependent. Because of their ability to rapidly colonize any hard surface, zebra mussels also pose a significant risk to many bottom-dwelling species, including our rare and endangered freshwater mussel populations. Zebra mussels can attach themselves to the native mussel shells, making it impossible for these animals to open or close, burrow in the stream bottom, or feed. Zebra mussels also can damage boat hulls and engines. Colonies of zebra mussels lodged in pipes can cause millions of dollars of damage to water and power plants. You can help keep Virginia zebra mussel-free! Report any zebra mussel sightings and make sure to inspect, clean, and dry boats and equipment thoroughly when transferring from one water body to another. Read more about the zebra mussel and what you can do.